- August 14, 2011
This time I will talk about some tips about how to create assets to games. I will focus mostly on models and the way I done them.

So from begin:] What tools I use :
I will start from the begin :] of course I mean by that mistakes that I done. I begin creation of models to LBA remake from environment everything was ok until I put character to game than I remade almost all earlier models :] For my luck I didin't have too much of them.

Why I done it ? Because there was problem with scale and feel of everything. In games it's not important that something is bigger than in real life. In most case when you try do real size you get claustrophobic feel of  location. Other thing is that you do levels the way that all mechanics didn't have problems with collision and interaction. So after this lesson I begin almost all of my scenes from some scale reference for example: 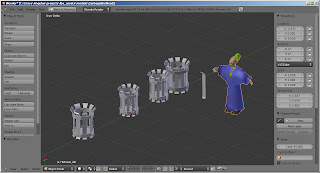 As you can see I have Twinsen model in scale I use it in game and bin model is done in scale to it. But this don't resolve all problems like the feel in game.

That is the reason why you need some working version of game. There is no need for big mechanics, simple walking maybe jumping. If you don't have them you for sure will remake all assets later because you will find places to high to jump or some place will be to narrow and you will not feel good when moving there.

Next things that you can't believe renders from graphic program.

So from left: very week hi poly with area light, low poly rendered in blender, model in game. You can see that if I spend more time on hi poly model and render it others would look very poor. But on on end you will put the low poly model with baked normal. Other thing is that you never will configure your render program the same way you render in game or you will don't do that because the rendering will change with game development like in LBA remake.

The last method I use are placeholders. You can see them in almost all my previews. They are very nice way to creating quick location. In my case most time I spend not on modeling but unwrapping and creating textures. Thanks to placeholders I can create model that don't have textures and use it to test the game.


Right now there is less and less people that create pretty good models and want to help with creating graphic in projects where there is no money behind it. I understand that and this is the reason why I decided to learn how to create graphics. I slowly learn on my mistakes and probably you have better ways to create models. So if you have  it would be nice to hear about it, because it's always nice to learn something new.