- October 26, 2013
After "little" break lets return to topic. Last time we ended on system that was already split on two threads. This week we will focus how to change it so it work the way we wanted:

So let's start from analyzing a little more situation on which we ended  in last part : 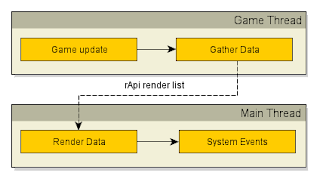 This model look already pretty good and would be enough in some situation. We can use it in this way :

Place marked as "Sync" mean time in which "Gather Data" wait till rendering finish using rApi render list (buffer contain all information's need to render frame). As we see game can update in meantime of rendering. So everything should work faster than in one thread.

Of course there are some examples which show that this situation is not always so nice as shown in earlier pictures i.e we can have situation like this:

Rendering task is not finished (some more complicated scene is rendered) but game could already prepare data for next frame. My resolve to this problem is double buffering of rApi render list. Thanks to that everything is more smooth and may look like that:

If there is good implementation it's easy to extend this idea on triple buffered version. But as always we need to remember more buffers is not always good things:


If wee add to this solution the same number of buffering of dynamics geometry. We resolved first point from list on end of last post:


"It [White Rabbit Engine] use dynamic geometry that update rApi buffers in meantime of game loop."

Then move to synchronized loading of resources. In Open GL it's not easy task (at last I didn't found nice solution to it) because we need to create/upload/destroy resources on the same thread where context was created. So we need to split all resources on two initialization:

White Rabbit Engine used for this purpose tasks put into ring buffer. Where tasks are:


So on end almost everything what is happening in main thread loop is task. Good thing coming from this is auto synchronization. There will be no situation when rendering will try to use data that is still not created. So we resolved second point :


"Textures and meshes can be load in any moment of game (preparation for streaming)."

And on end was left:

which is resolved by creating additional thread in meantime of loading. This thread only render loading screen with smaller frame rate. In this time game thread load map.

White Rabbit Engine work on this system already 2/3 months. I like it because:
So this post end introduction to multithreaded rendering in White Rabbit Engine. When I will move on my normal computer I will try do some charts how everything changed after moving on this new system. But I still don't know exactly time when this will happen.

So till next post.
Grafika kodowanie programowanie projektowanie silnik WRE