Showing posts from December, 2015
Show all 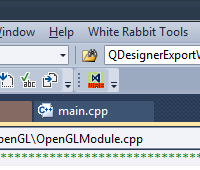 If you remember my  7 hours of hell post   you probably wonder why postmortem. To give you introduction to this you need to know that I recently done port to Visual Studio 2013 (I used vs2010 till now). This migration was planned for some time already. I even started it in the past. But never finished because rebuilding of external libraries was pain in the a.. . Now I fixed this issue by automated building script and without bigger problems I was able to compile everything with Microsoft compiler ver: 12.0. If this was good idea I still don't know but for sure I know that I still fixing bugs and issues that shown in meantime. I don't mind it so much because some of stuff I do right now were also in plan for future. Probably you are curious what my one button plugin postmortem have to do with this changes ? Answer is simple I miss my one button plugin in Visual Studio 2013 ;( I tried to use plugin without any modification but it didn't work and for now I work withou
2 comments
Read More »
More posts